How Jackie Robinson Saved My Life

Today is Jackie Robinson Day. This is a guest post by my good friend Vince Antonucci. It’s an inspiring and highly relevant story. Enjoy! And check out his new book, Renegade: Your Faith Isn’t Meant To Be Safe. – John

I grew up in a verbally abusive home. My father’s violent tirades were like heart-seeking missiles. And if my father, someone who was obligated to love me, couldn’t love me—if he couldn’t find anything special in me, I reasoned I must be defective.

I needed a place to escape, and I found it in baseball. I tell people baseball was my first love, and I mean it. From age six I was watching games on TV, memorizing statistics on the backs of baseball cards, playing out imaginary games with my glove and a tennis ball in the backyard—all of this helped me escape my father.

And in baseball I discovered another guy who lived where violent words came rushing at him. But he didn’t go to baseball to escape the abuse, he went there to receive it.

Jackie Robinson was born in 1919 into a family of sharecroppers in Georgia. Jackie’s father abandoned the family when Jackie was a year old. Young Robinson grew up in poverty, but with great athletic ability. He eventually became the first athlete at UCLA to win varsity letters in four sports. 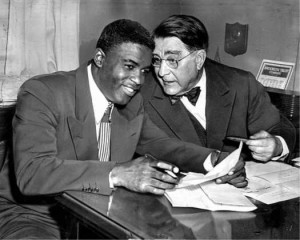 In 1945 Jackie Robinson accepted an offer to play baseball for the Kansas City Monarchs in the Negro League. Little did he know Branch Rickey, the president and general manager of the Brooklyn Dodgers, was scouting the Negro leagues for a player to break Major League Baseball’s color barrier.

Rickey chose Robinson and called him in for a meeting that would last three hours. Rickey explained to Robinson he would be attacked by racists if he joined the Dodgers, but Robinson could not fight back. If he did retaliate, racist rage would explode. “Are you looking for a Negro who is afraid to fight back?” Robinson asked. Rickey told him no, he needed a Negro player “with guts enough not to fight back.”

On April 15, 1947, Jackie Robinson joined the Dodgers and became the first African American athlete in professional sports. Then came the hailstorm. Racial taunts and slurs, death threats, character assassination, physical attacks on the field. It was worse than Branch Rickey had promised or Robinson expected. But Robinson knew the defect wasn’t in him but in those who attacked him, and somehow he rose above it.

As a boy I read about Jackie Robinson in my bedroom, hiding from my father who watched TV in the next room. I was captivated. Empowered. Jackie Robinson opened a whole new way of life for me. My room soon became filled with posters and baseball cards of Jackie Robinson. Over the years this culminated in a personalized license plate I happily pay extra for to this day: “42.” It’s my way of honoring a man who lived so courageously.

Jackie Robinson taught me I didn’t have to live a “normal” life. I could defy the odds. I could do something with myself despite all the pain and mess of my childhood. He gave me courage.

I found out that as a young man Jackie Robinson himself was inspired by someone, and that someone was Jesus. Robinson grew up in a Christian home and was later mentored by a minister named Karl Everitt Downs. Though not perfect, Jackie did his best to follow in the footsteps of a man who knew a lot about rising above. Many people don’t know Robinson invested the last years of his life as a supporter and speaker for the Southern Christian Leadership Conference. He also started an organization called The Church Fund, which raised money to rebuild African American churches that had been burned down because of their role in the Civil Rights movement.

Branch Rickey was also influenced by Jesus. During their three-hour meeting in which Rickey told Robinson he couldn’t fight back, the two spoke of Jesus’ teachings about loving enemies and turning the other cheek. These teachings became the centerpiece of their strategy. A Jesus-inspired strategy that led Robinson to become not only the first black player in the Majors but also a national hero we’re still making blockbuster movies about today. Jackie Robinson was an ordinary man, but the impact Jesus had on him made him extraordinary.

I think that’s what we’re all looking for. A way to break out of ordinary, to overcome the mundane and expected, to live our lives at a higher level. We all desire that, but to experience it we need help.

That’s why I wrote Renegade: Your Faith Isn’t Meant To Be Safe. It’s a book about this kind of life – the kind of life Jesus and Jackie Robinson inspire me to live. Today I’m a pastor near the Las Vegas strip, which is definitely out of the ordinary. I’m not sure I live at a higher level everyday, but I am trying.

My hope is that Renegade will help people connect with Jesus in a way that moves them toward extraordinary lives. I’m so eager to see this happen, I teamed up with my publisher to sell the ebook version for 99 cents from April 12-19 in honor of Jackie Robinson, who is celebrated in the newly released movie 42.

People think I’m crazy. They point out I won’t make any money from a book that’s selling for 99 cents. But money isn’t the point. The courageous, renegade life is, and I guess this is just one more example of how Jackie Robinson has helped me rise above.

I hope you’ll pick it up, and if you do I’d love to hear what you think. You can email me here.

John Burke is the lead pastor at Gateway Church in Austin, Texas. He has a passion for family, writing, and sailing on Lake Travis. He is the author of No Perfect People Allowed, Soul Revolution, and Unshockable Love / Mud and the Masterpiece

ARE YOU MORE LIKE JESUS OR THE PHARISEES?
TAKE THE SURVEY
John’s Recent Tweets